How to Change the Culture of Your Team

Bad habits are easy to form and even harder to change. That goes for individuals and it can also apply to teams. Left unchecked, bad habits become a part of your company's culture and can damage productivity and morale on your teams.

If you look around your company and see parts of your culture you'd like to change, fear not; culture change is hard, but it's not impossible.  If you remember just a few key rules, you can bring the change you want to see.

How to bring about culture change

Note: If you're just starting out, you can use these same principles to help build the right values into your culture.

1) Choose the right thing to change or add

Whether you're adding a new value or trying to change an existing way of doing things, it's going to be difficult. Make sure what you're choosing is worth the requisite effort. Instilling a value into your team is a process measured in months and years, not hours or days.

Ask yourself when you're thinking about adding to your culture:

The wrong answer to any of the above questions will completely derail any hopes of having your team adopt the value, as they can all lead to a belief that the value is hypocritical and meaningless. And when that happens, you're on your way to not being a good place to work and possibly worse consequences. Remember, these were values at Enron: 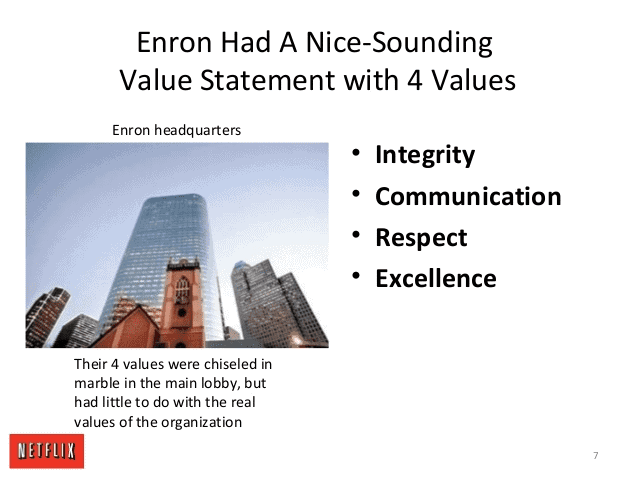 2) Lead by example from the start

Culture isn't some words on the wall, or nice perks, or even a fancy powerpoint deck. It's what you and everyone in your company actually does consistently as you do your work in the company. As a leader or manager, people follow the example you set.

This isn't always easy. Part of a strong culture is that it impacts the hard decisions you have to make. It's not just what you do when things are going great. As SEOMoz founder Rand Fishkin writes:

If you're trying to figure out what a company's values really are, look at the decisions management makes when lots of money, risk, or loss of face for executives is at odds with the stated values. Want to know the company's mission & vision? Look at what they've intentionally chosen not to do, even though it could be lucrative.

If you have a value you want to instill in your team, think about how you can live the value so everyone sees it. How can you prove the value matters and show how others should also apply it? When you come with the mindset that you need to take the values more seriously than anyone else and ensure you live them, you have a chance to make the new value a part of your team.

3) Restate this more times than you think necessary

You said it once at an all hands meeting. That's enough, right? Wrong. If you really want the value to sink in with your team, you need to repeat yourself. A lot. As Linkedin CEO, Jeff Weiner, said in an interview,

"A friend of mine once paraphrased David Gergen, saying on the subject of repetition, "If you want to get your point across, especially to a broader audience, you need to repeat yourself so often, you get sick of hearing yourself say it. And only then will people begin to internalize what you're saying."

If a value like last week's post on managing expectations is important to you, you need to repeat yourself every chance you get, ideally across multiple mediums.  Email about it, tell stories, talk about it in meetings, cite it as a key reason for someone getting a bonus or promotion, and yes, maybe even put it on the wall.  You want to keep repeating it until you sound like a broken record and you start hearing others in the company talk about it without your prompting.

Your people want more feedback than you're probably giving them. If you really want a value you're adding or changing to stick, make sure you give feedback, and especially positive reinforcement for those demonstrating it. This signals what behavior you want to see more of to both that person and anyone else who hears or sees your praise.

When you do give praise, make sure you do it right. You need to make praise specific for it to matter.  This means telling them, "I love how you took the initiative and got that project done, while managing my expectations on your other work" not just a "Good job" and the assumption that they know what you meant by that.  It takes more effort on your part as a leader, but it's the difference between seeing more of what you want and having people shrug off your comment as patronizing.

On a bigger scale, if a value is truly important, consider how you reward your people. If the value is truly important it should be part of how you hire, fire, and promote. Who you promote signals to everyone to be more like them if they want to advance, while who you fire shows what's not acceptable.  Don't take either decision lightly or you risk alienating people.  While for legal reasons you may not be able to say much about firing someone to your team, when you promote someone, take it as an opportunity to shine a light on why they were deserving and how that translates to your values.  As Jeff Lawson, CEO of Twilio said:

"If you articulate [your values], they're real and all you're doing is stating what's there. Because if you don't put a spotlight on them, you're at risk of losing them."

If you're looking to add a value to your culture, realize it will take a lot of work, but these steps will ensure it sticks.

An Example: Eat the Frog!

Advice is cheap. These all sound good in theory, so I want to share how a company a friend of mine is cofounder of has added a really cool value to his company, Grove Collaborative.

Stu, the CEO of Grove, introduced the value of "Eat the Frog" at a Monday morning all-hands team standup.  He explained it to their team, which came from author Brain Tracy as follows:

Mark Twain once said that if the first thing you do each morning is to eat a live frog, you can go through the day with the satisfaction of knowing that that is probably the worst thing that is going to happen to you all day long. Your "frog” is your biggest, most important task, the one you are most likely to procrastinate on if you don't do something about it.

On it's own, that's a pretty cool concept, and if he had stopped at just that, it's all it would have been. Instead, Stu and the team built it into their habits.

Immediately after explaining the "Eat the Frog" concept, Stu explained how it applied to all of them: they'd all be adding what "their frog" was to their standup each day and holding each other accountable to always "eat their frog" each day.  Stu went first to lead by example and everyone else then came up with what their frogs were. As each day's standups reinforced the concept, it became a part of the company's language. They even put it up on the wall:

Thanks to Chris Clark for sharing this story & the picture.

What happens if one day you forget the value, or you're faced with a really tough decision and you have to go against it? What if you fail to set a good example for once?

We're all human. Mistakes happen and so do extenuating circumstances.

The one thing you can't do is hide from it. People notice if you're being hypocritical and nothing is more destructive to a value. Do as I say, not as I do kills everyone's belief in a value and trust in you.

So if you do slip up or fail to live up to your values, own it. Admit the mistake, create a remedy, and work twice as hard to live up to the value going forward if you want it to stay a key value.

An example: a hot-button copywriting flub

A great example is how Ryan Hoover and Product Hunt handled a copywriting failure on their site that rightly upset many people. Within hours, Ryan wrote a great, humble apology post on Medium, his team deployed the necessary change, and put in place efforts to avoid making the same mistake again.

Thanks to his quick actions, this problem is long forgiven and forgotten instead of blowing out of proportion.  We could all learn from Ryan's example.

Culture change is hard. The habits people build in your company become like hardened concrete over time. However, with strong, intentional habits like the ones we've discussed above, you can be the change you want to see in your company.

How have you shaped the culture in your company? What's been crucial to instilling your values?